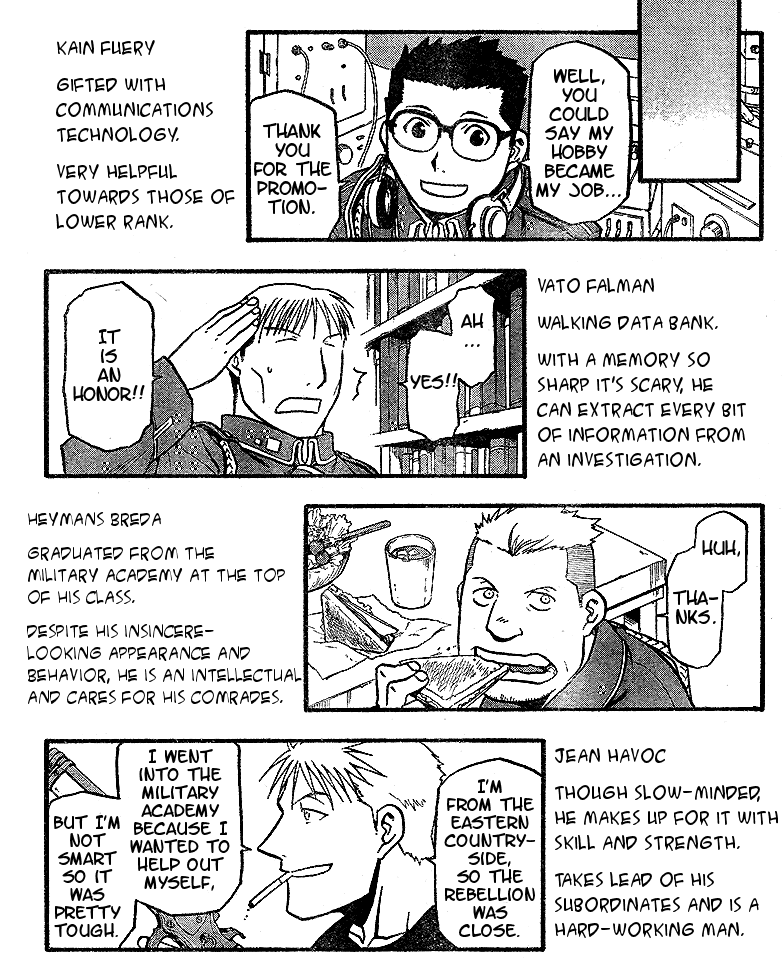 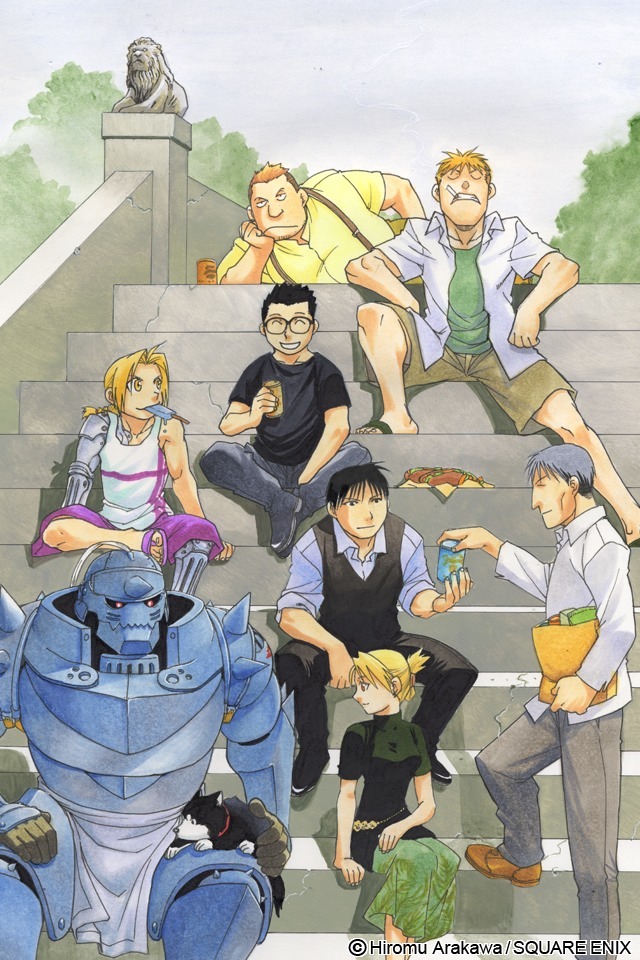 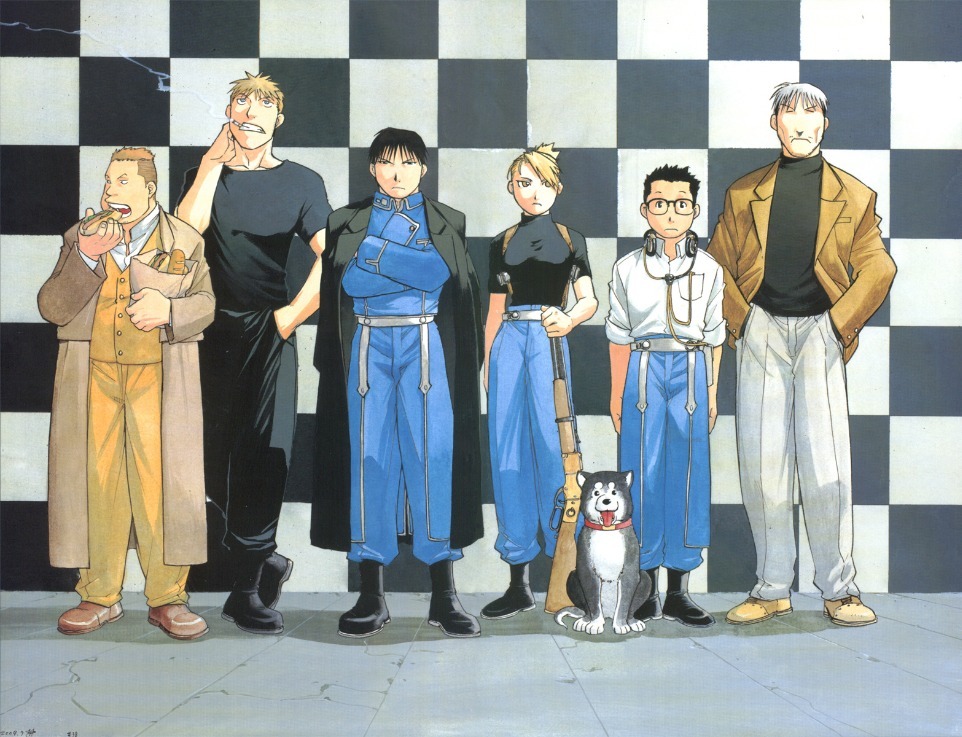 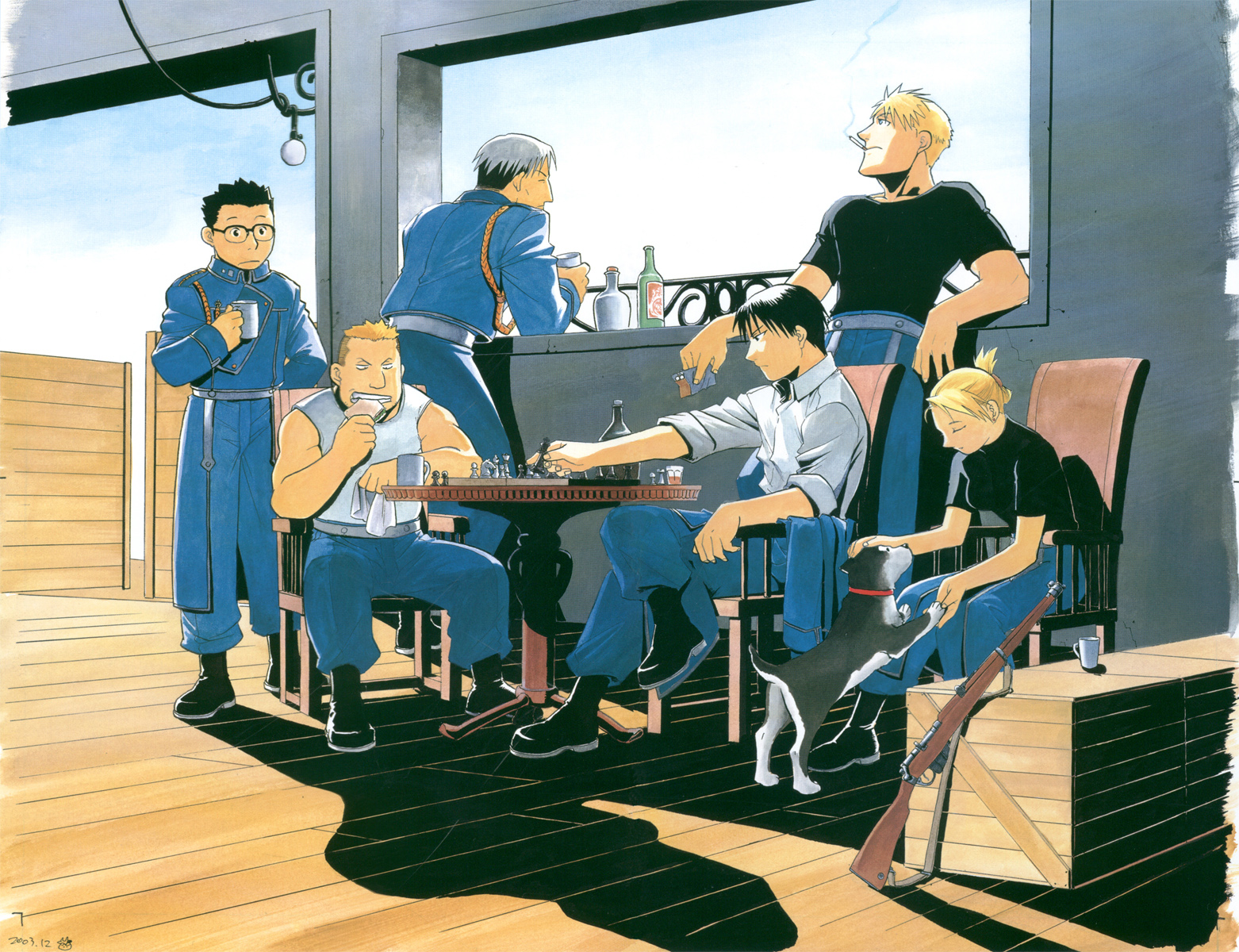 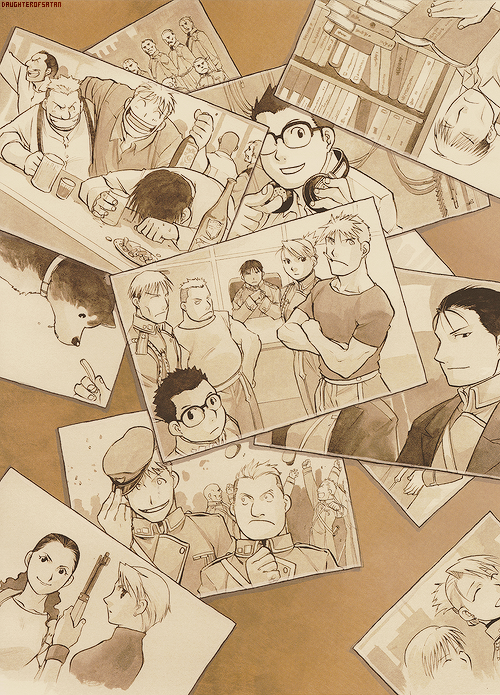 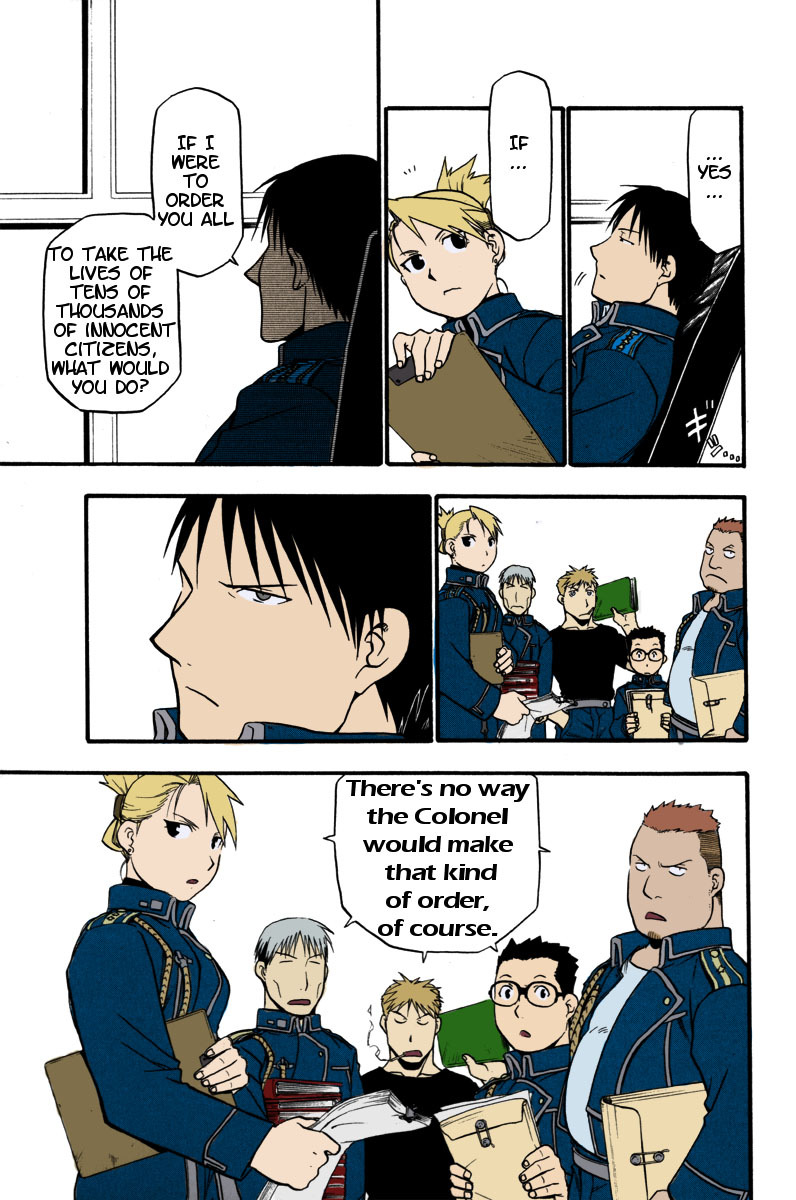 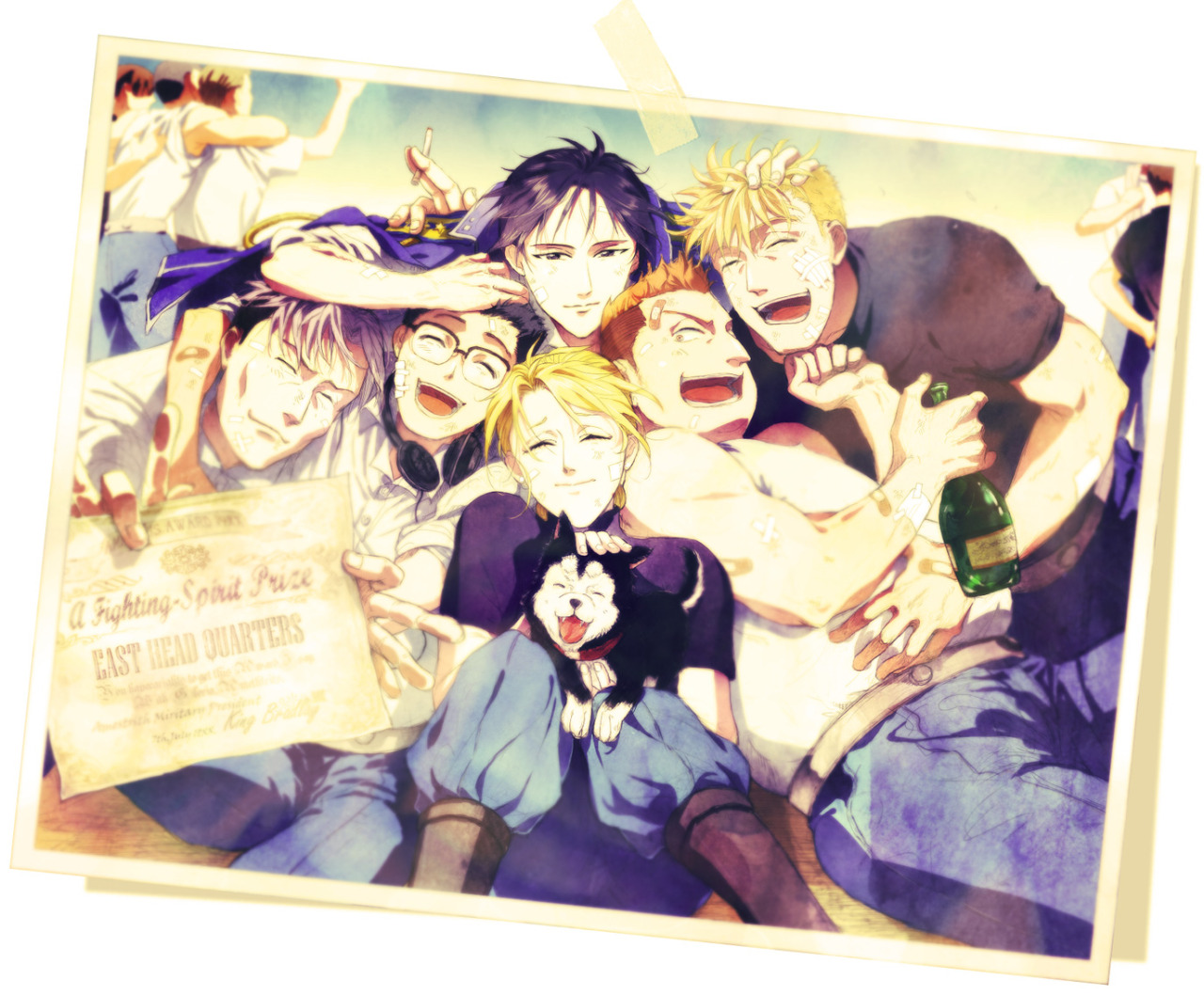 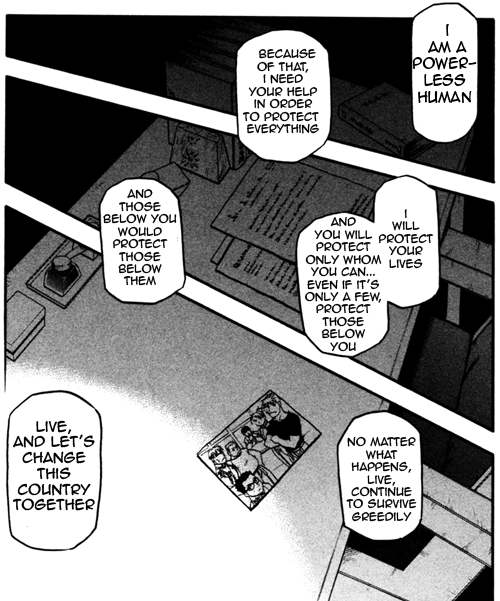 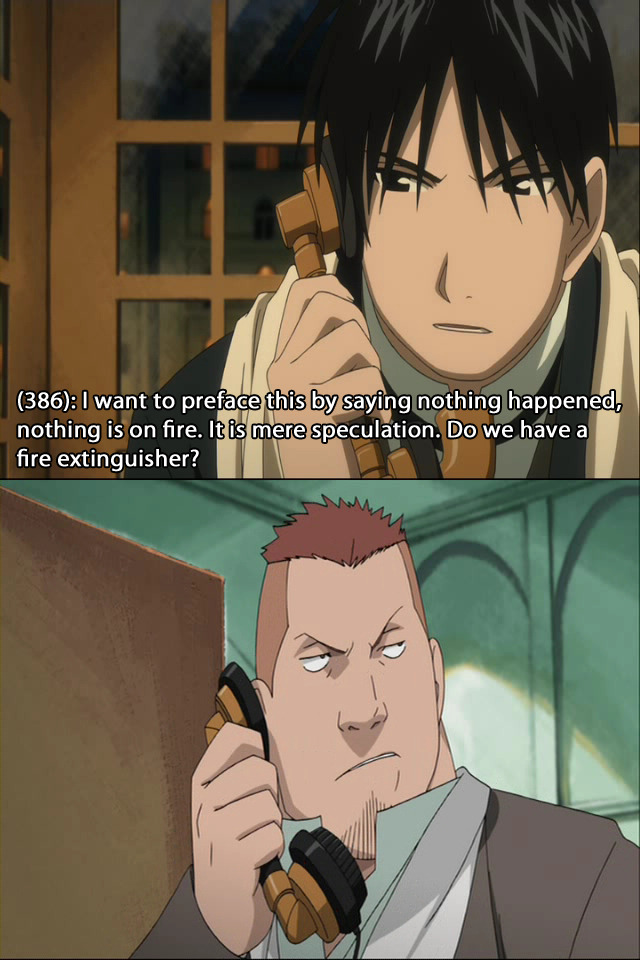 Rewatching Brotherhood, and one of the things I’ve always loved is how Team Mustang always treated Ed like the kid he was, despite his State Alchemist qualification.
I mean, don’t get me wrong, they respect him—but they respect him as a person rather than respecting for the title. When Maria Ross and Denny Brosh first meet the boys, they address Ed as they would a superior. Even when they reprimand him, they apologize to him for it and are afraid they’ll be punished since he technically has the rank of “major.” But Team Mustang never did that. In fact, the first time we see them interact with Ed (that is, the full team, rather than just Roy or Riza), we see that Fuery just addresses them by name: 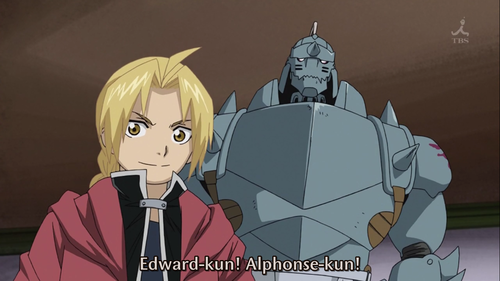 I’m pretty sure Ed outranks Fuery, being a State Alchemist and all, but you wouldn’t know that by the way Fuery addresses him by name like that. The others are the same, too, for the most part. This one is from Havoc: 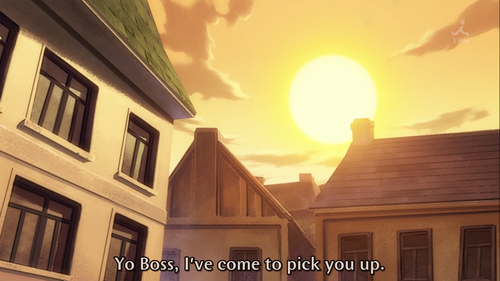 We get this from Breda: 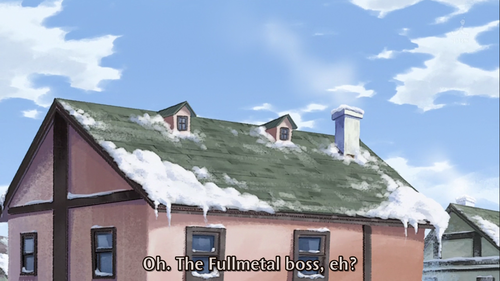 And while, yes, both of those nicknames use the word “boss,” they sound far more like terms of endearment rather than respect. (Especially since Breda followed that comment with, “I hope he’s okay,” and Falman followed it up with, “As do I.”)
Falman, as far as I can recall, always addresses them by name (and addresses them as “The Elric brothers?!” when he reunites with them at Briggs). Riza calls them by name, Roy calls Al by name (I think) and always calls Ed “Fullmetal” … they’re nicknames, terms of endearment. They’re shown respect, but they’re also treated like… well, let’s put it this way: if Team Mustang really is a ragtag sort of family (and let’s be real, it is), then Ed and Al are the kids of that family and have always been treated as such.
I mean, remember the Scar incident?
We get Havoc helping Ed up and making sure he’s okay. (I just love how Havoc keeps his arm around Ed even though Ed’s long regained his balance and it’s not even a “I’m still holding you up” in like a physical way but this looks like he has his arm around Ed to be comforting because Ed’s arm was just destroyed and Al was in danger.) 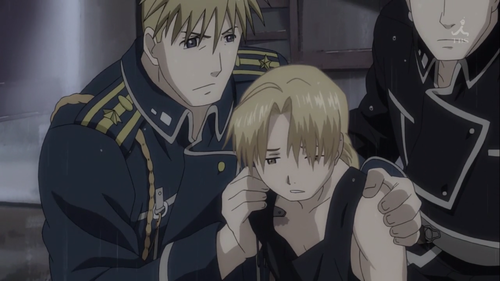 Mustang—of all people, MUSTANG—smiling like that as the brothers reconcile (after Al yells at Ed for almost throwing his life away and the two calm down and say, “yeah, we’re still alive”). 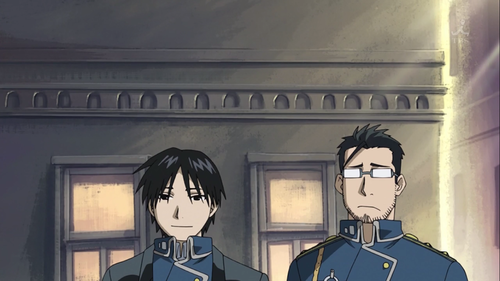 And yes, Hughes looks all put-out, but it’s okay, a moment later and he’s in on it too: 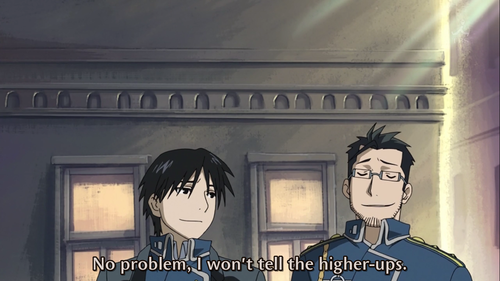 And then Riza gives Ed her jacket: 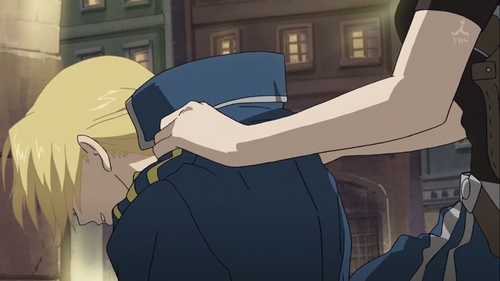 And just—would you just look at them: 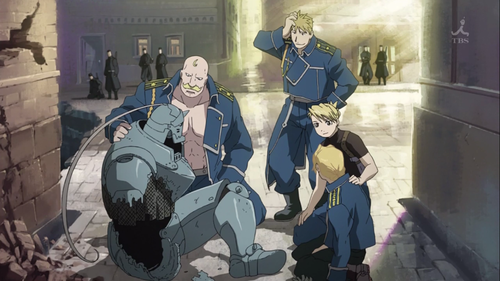 Even Armstrong gets in on it and he’s not even a member of Team Mustang (but he’s kind of like an honorary member in the sense that he’s on Team Mustang’s side from the start, just like Hughes, though Hughes is even more of an honorary member of Team Mustang than Armstrong).
I’ve always just really, really, really loved the way Team Mustang treats Ed and Al, like they’re kids/family/part of the time, how they really, genuinely care about them and always have. It’s not just that Ed outranks them, but more that Ed is Ed and they care about him for that reason (and care about Al because Al is Al). It really shows, and I’ve always loved it.
(And you know? I would guarantee you that Ed and Al love it too, even if Ed is a bit more reluctant to admit/talk about it.)

One of the things I really love, aside from the way Roy panics when Hughes says “the only famous state alchemists around here were you and Tucker, right?” (re: Scar) because he realizes that Ed is also in the area and likely to be a target, is the way that, when he shows up to save Ed from being murdered by Scar, he brings his entire squad with him: 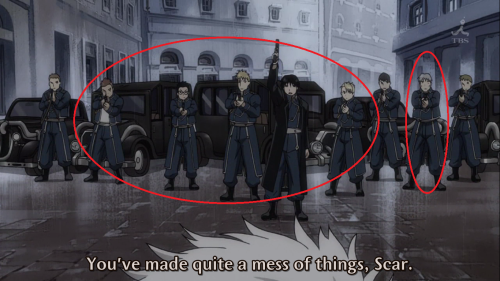 Every single member of Team Mustang is present and accounted for, even if Falman is standing a bit separately from the rest of them. The honorary members, Armstrong and Hughes, are there too, but they don’t show up until a bit later. (There are also some extra people, but still, whatever, they’re not a part of Team Mustang, they don’t matter.)
I just … Roy freaks out and has a total “oh shit” moment when he realizes that Ed is on the hit list, and not only does he go to rescue him, but he makes sure to bring every single one of his most loyal and trusted companions to make sure the job gets done. Not just Riza, not just Havoc, oh no; every single member of the team is brought together to help this boy, probably at least partially due to the fact that they all care about him (and Al, too, but Ed was the only one Scar was focusing on; he only attacked Al because Al got in the way) a great deal. (After all, they weren’t all around when Hughes and Armstrong told Roy about Scar, only Riza was, meaning that Roy found the rest of them doing whatever they were doing, told them about Scar hunting down Ed (and by extension, Al) and bam, they were there, probably no questions asked or complaints issued, because goddamn right they’re going to go rescue those boys, how could you ever think otherwise.)