>This page is for collecting various manga and anime I really liked that don't really warrant their own page. 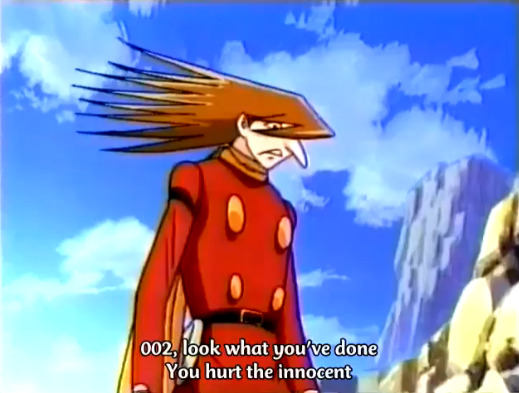 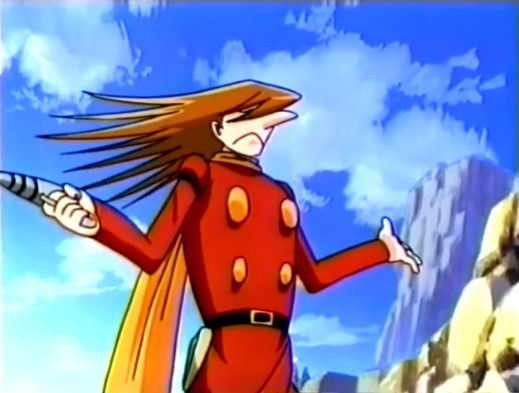 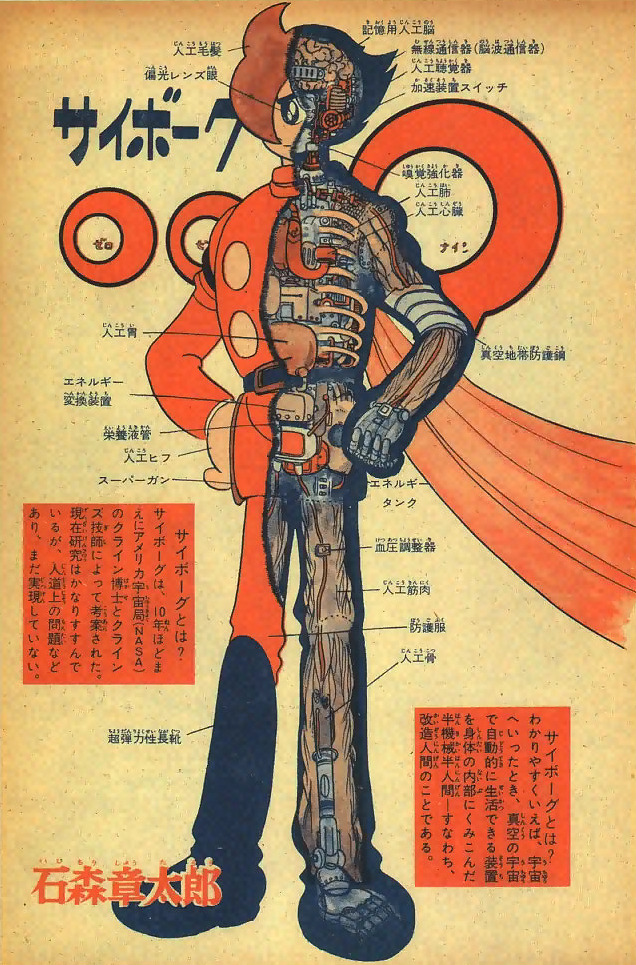 > I'm not a super huge fan of the orignal Devilman manga, but DEVILMAN crybaby, Devilman Grimoire, and Devilman Lady are pretty good. 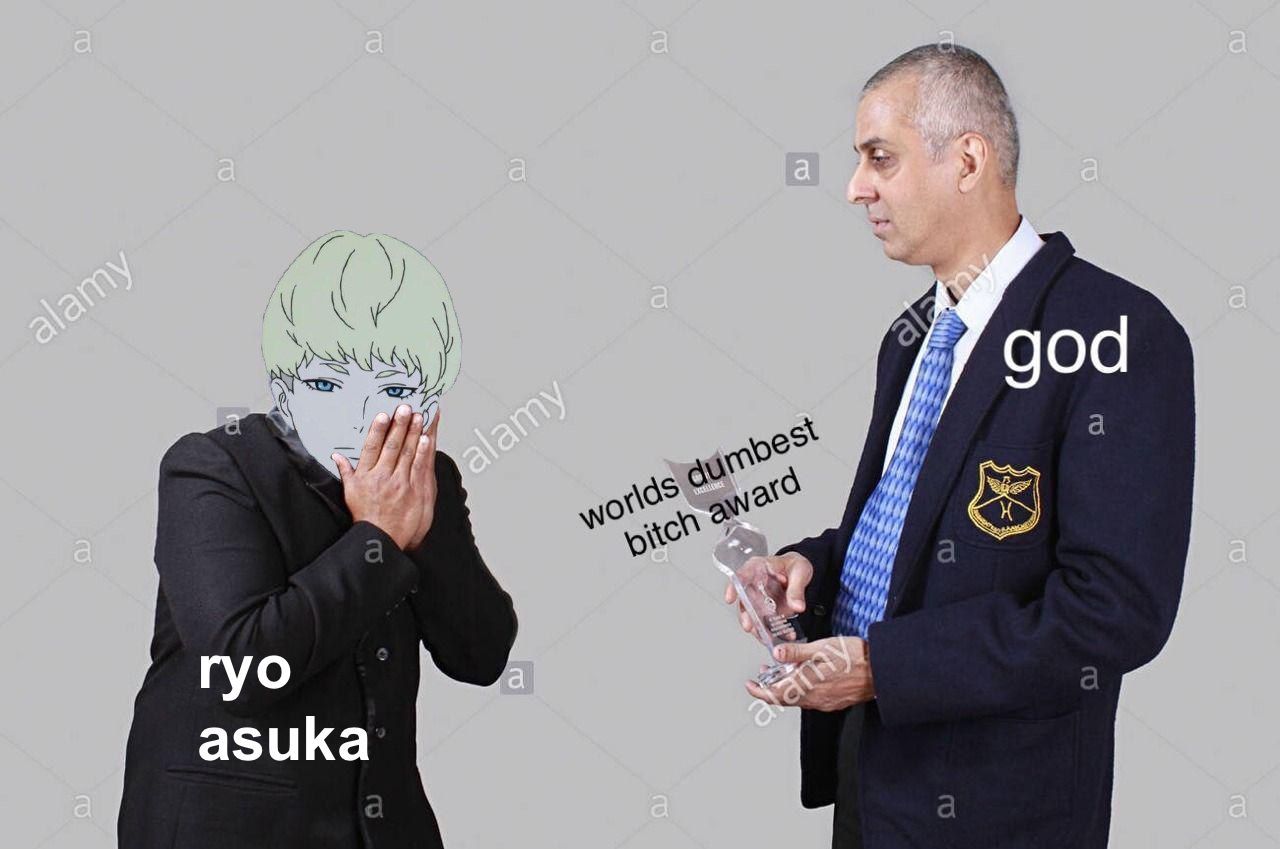 the differences between ryos

crybaby:
Akira:i'm hungry; i'm gonna go to mcdonalds and eat fries off the floor
Ryo:sit down, the chef is making wagyu beef

manga:
Akira:*meets ryo at mcdonalds where he is clearly high as a kite and already eating floor fries* 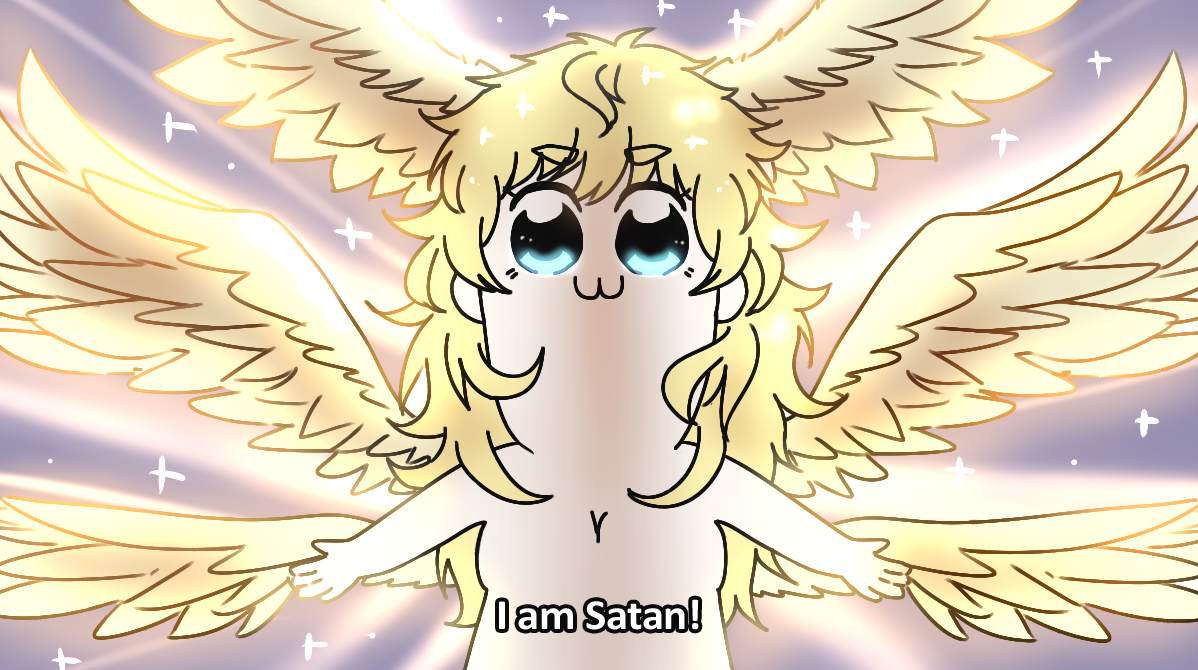 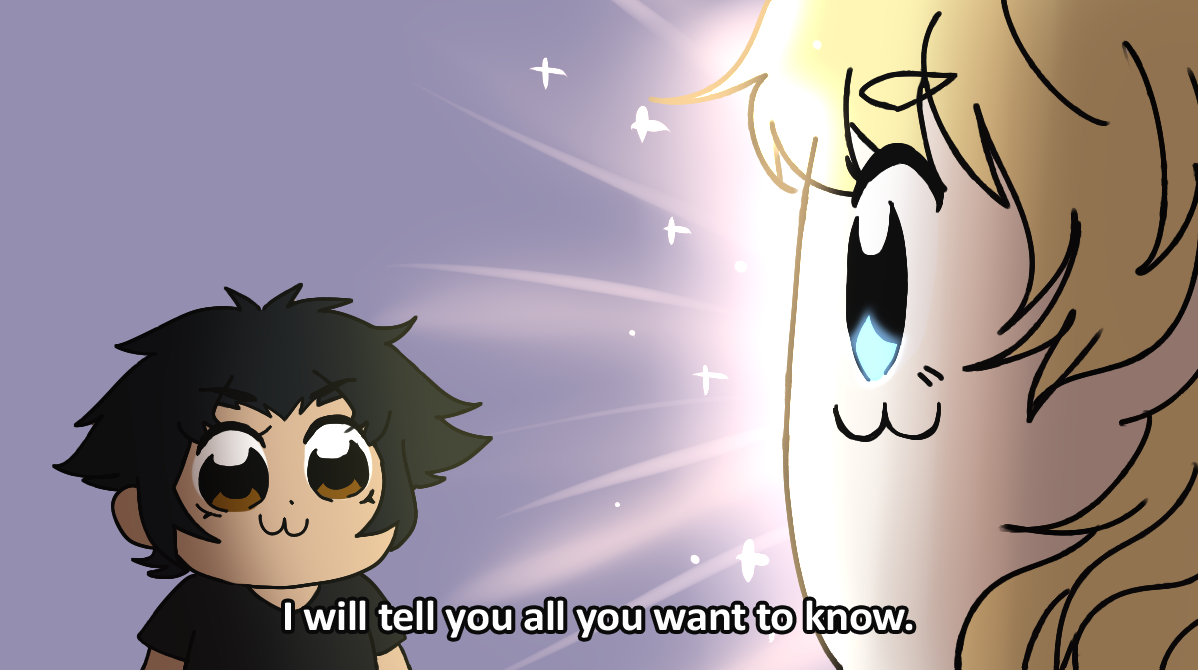 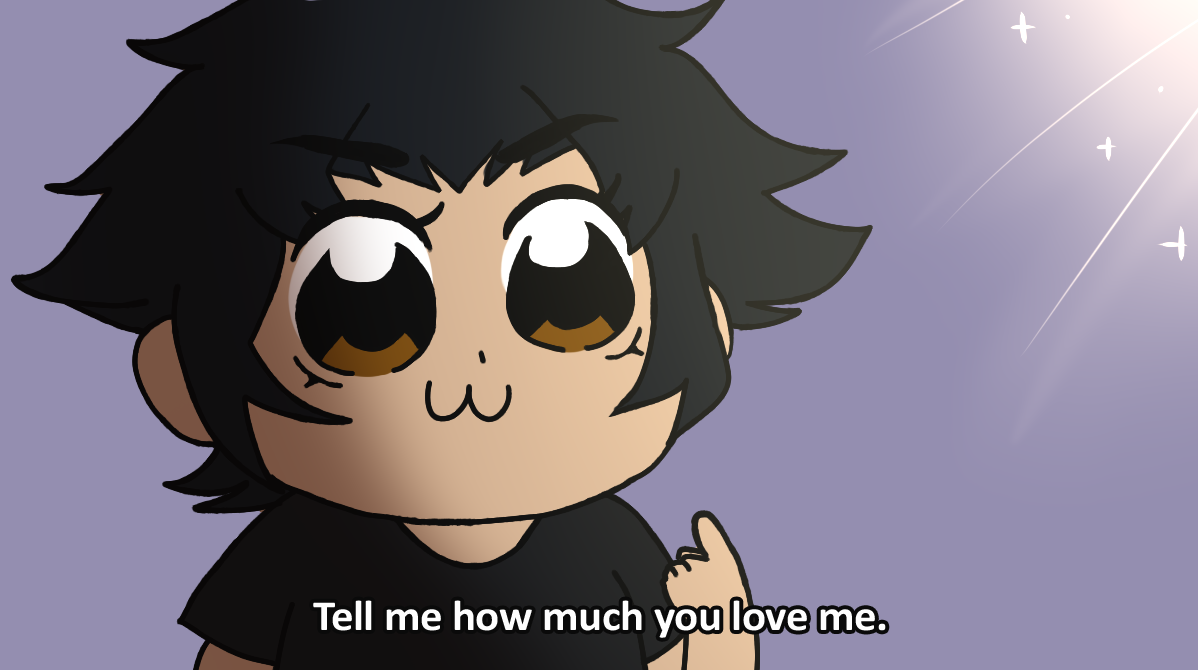 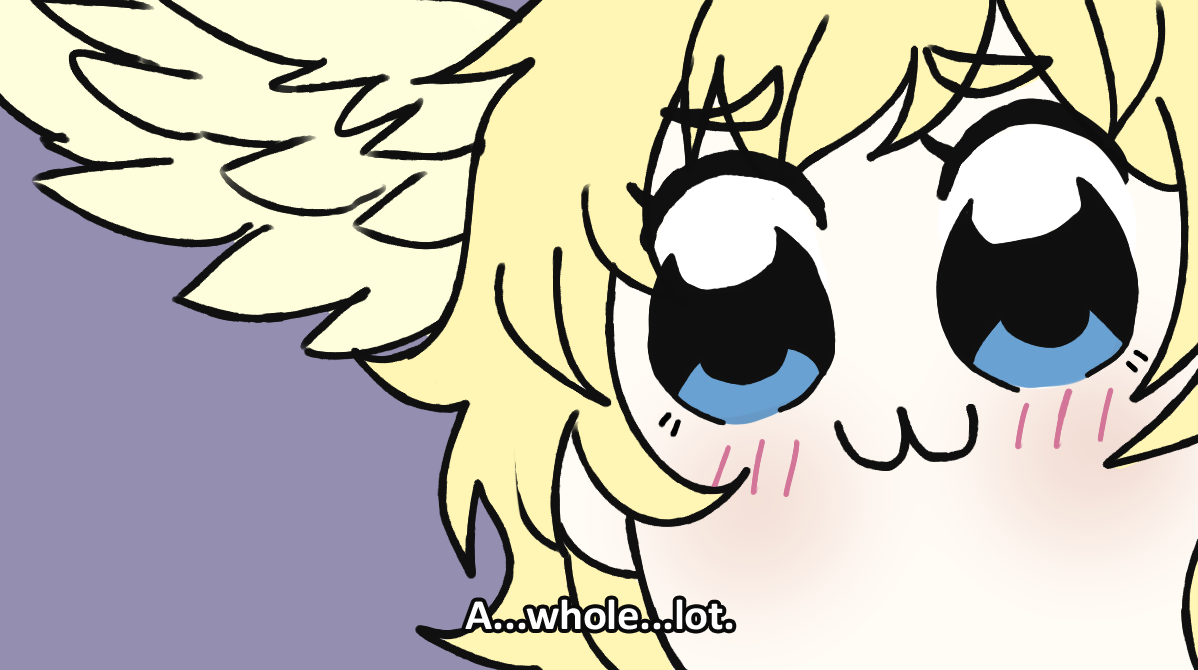 >I'm currently working my way through the series, starting with the original Mobile Suit Gundam. I really like it! I even got a little model kit of the White Base and a little gacha figurine of the Guncannon. 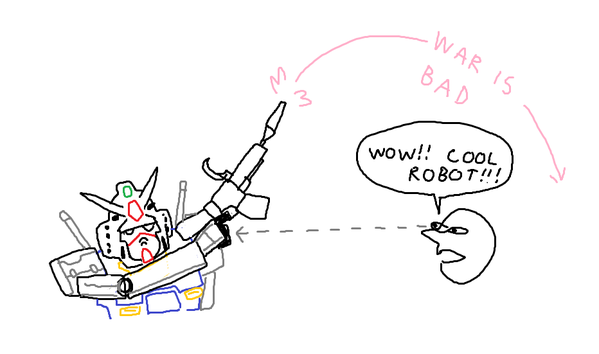 “I'm sorry, Lalah. I still do have a place to go home to... and nothing could make me happier...! I'm sure you understand. We can be together any time we want... Lalah...” 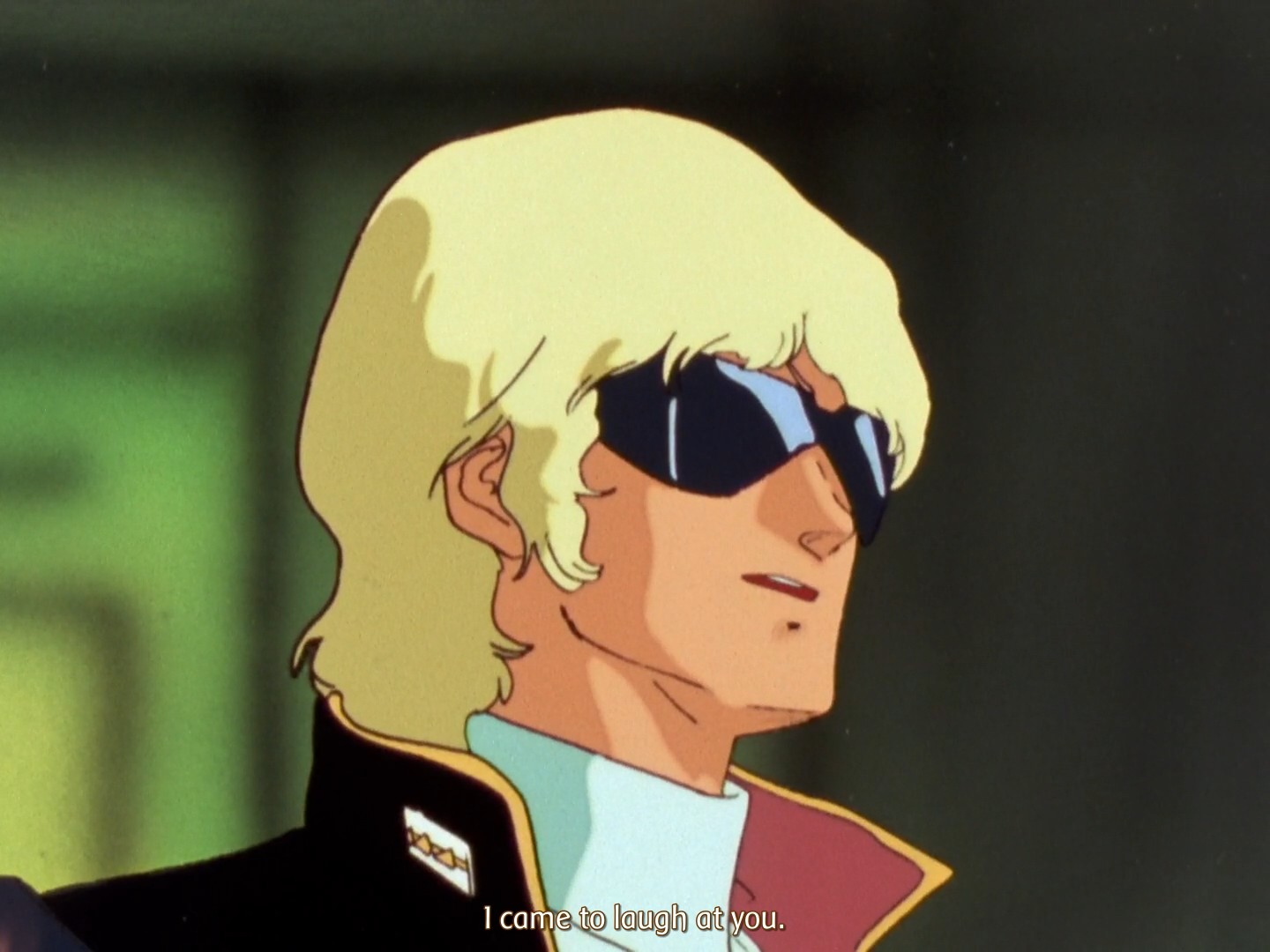 > I love this dumb group of found family morons. 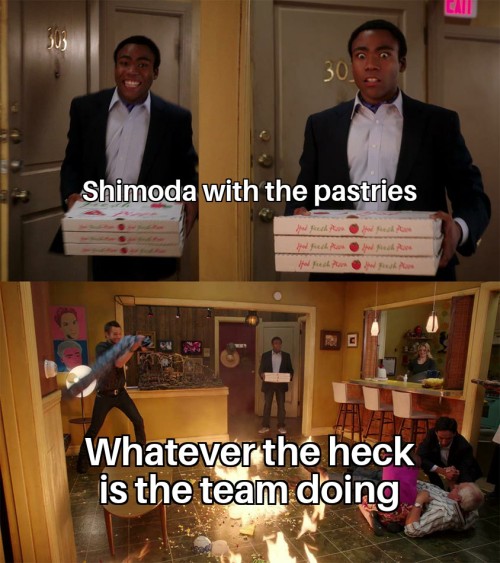 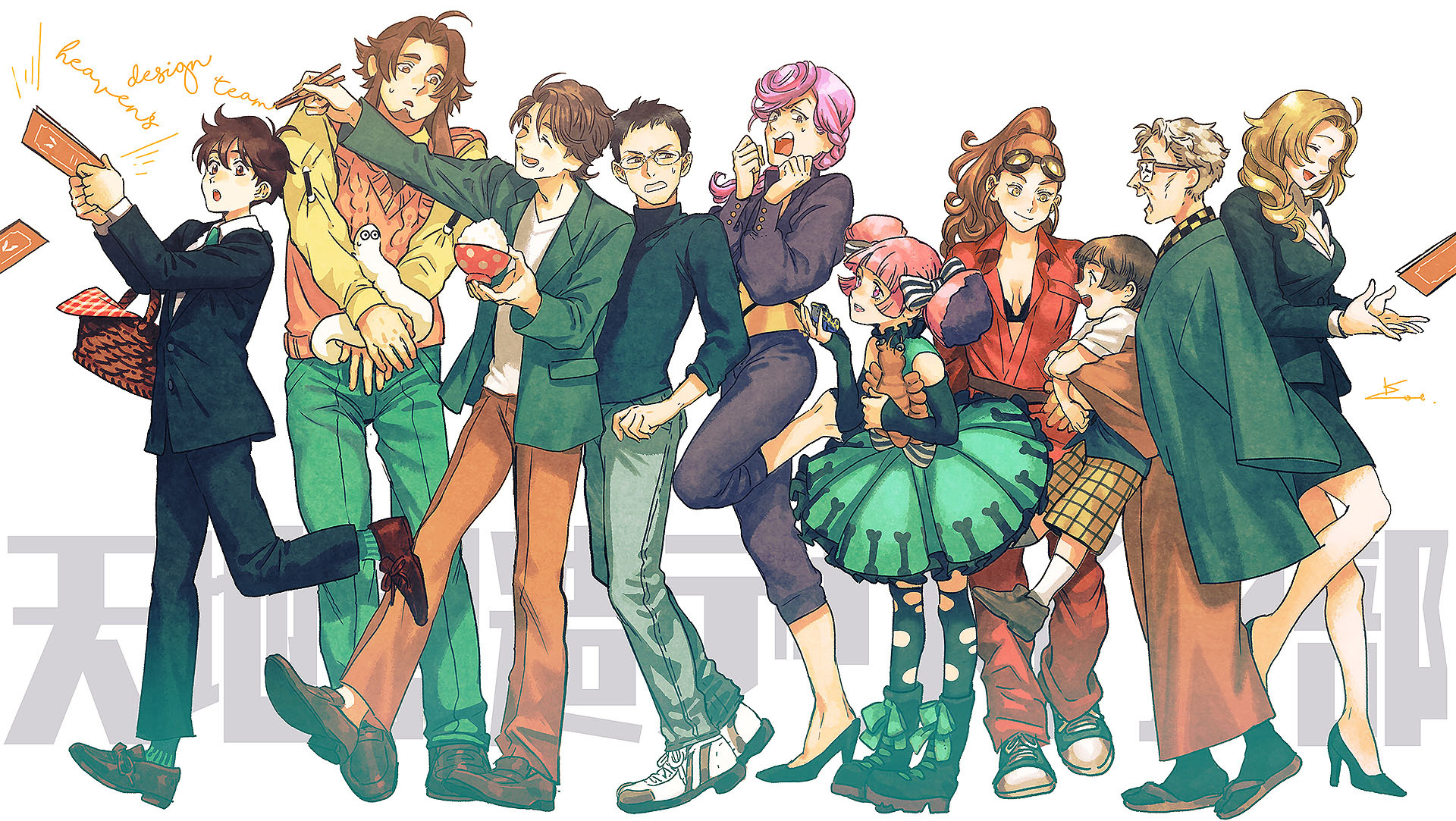 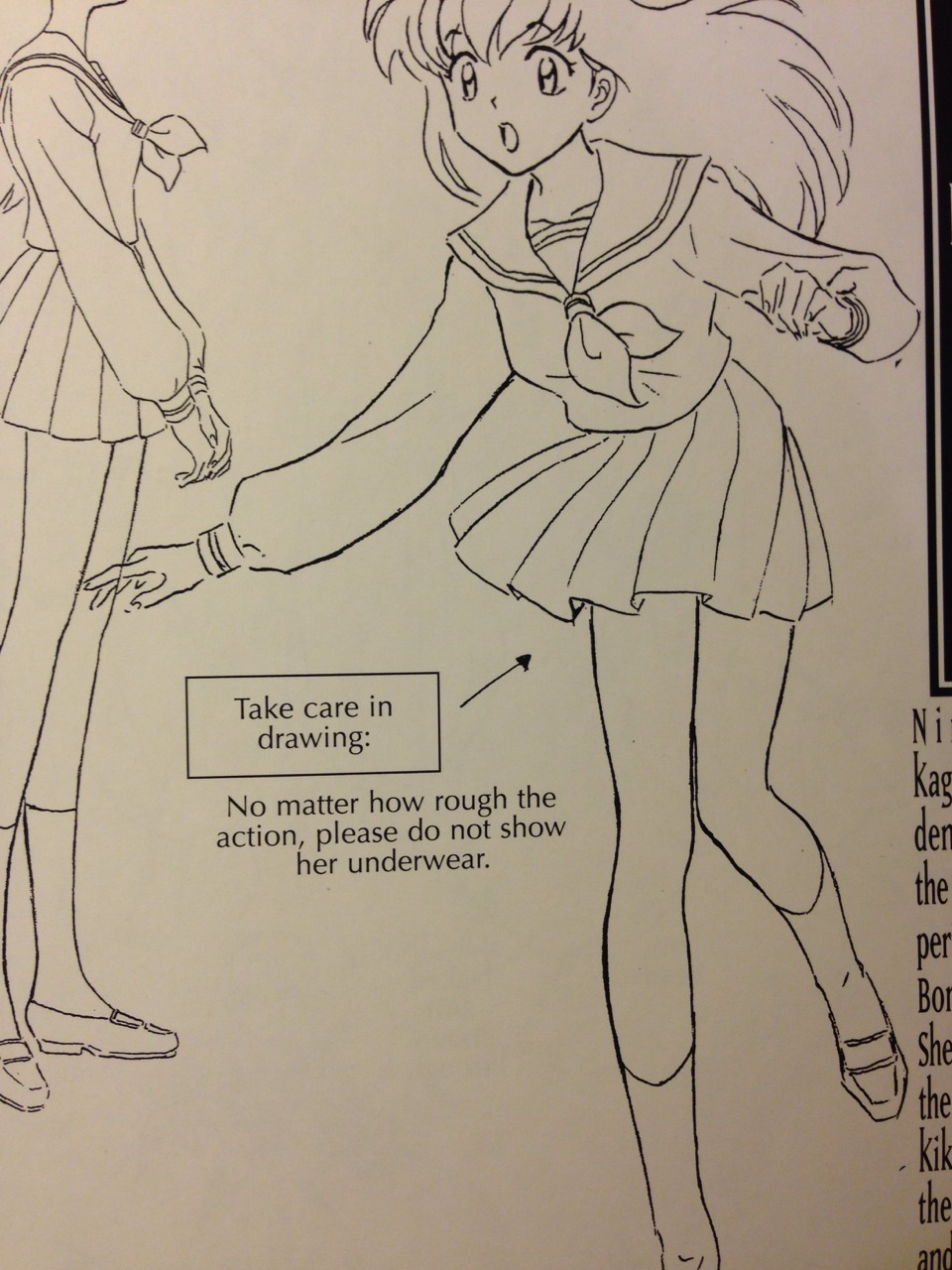 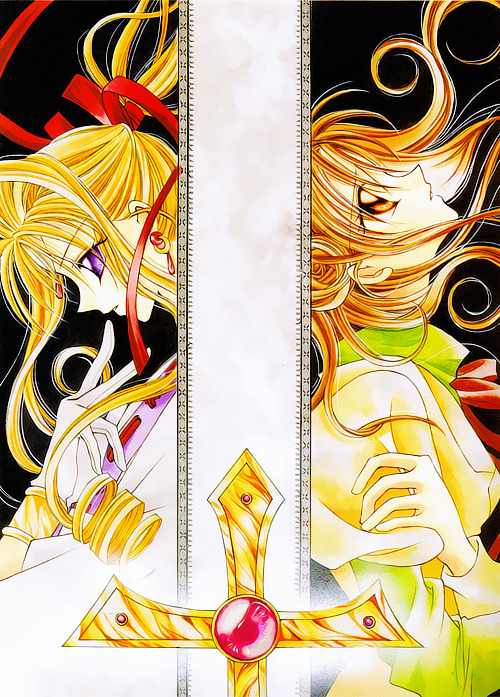 Hey, remember that time Arina Tanemura made a magical girl manga where the main character was told that she needed to be a virgin to keep her powers, and if she was no longer ‘pure’ she’d lose them, but then she had sex anyway with the guy she loved, and not only did she still have her powers afterwards, but she realized that in the end she didn’t even need her powers, she actually managed to win because she decided that she didn’t want to use her powers but only needed to be herself.
Remember that? That was awesome. 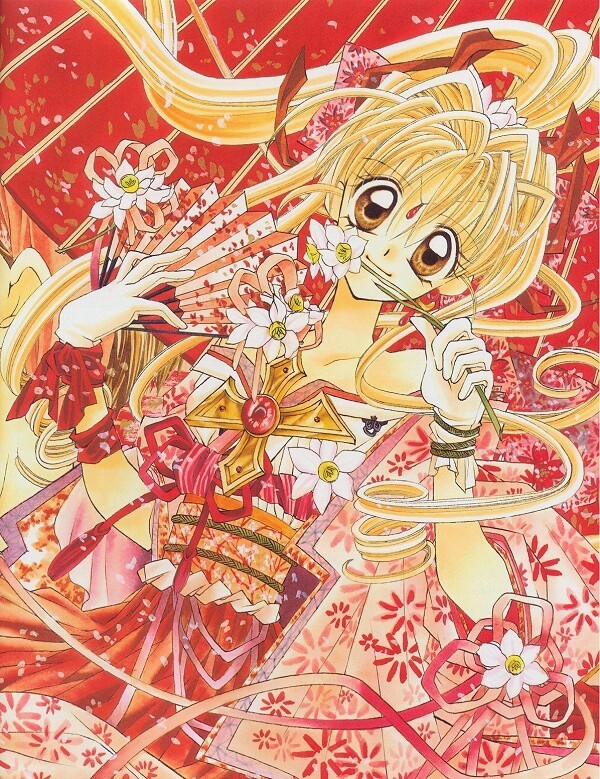 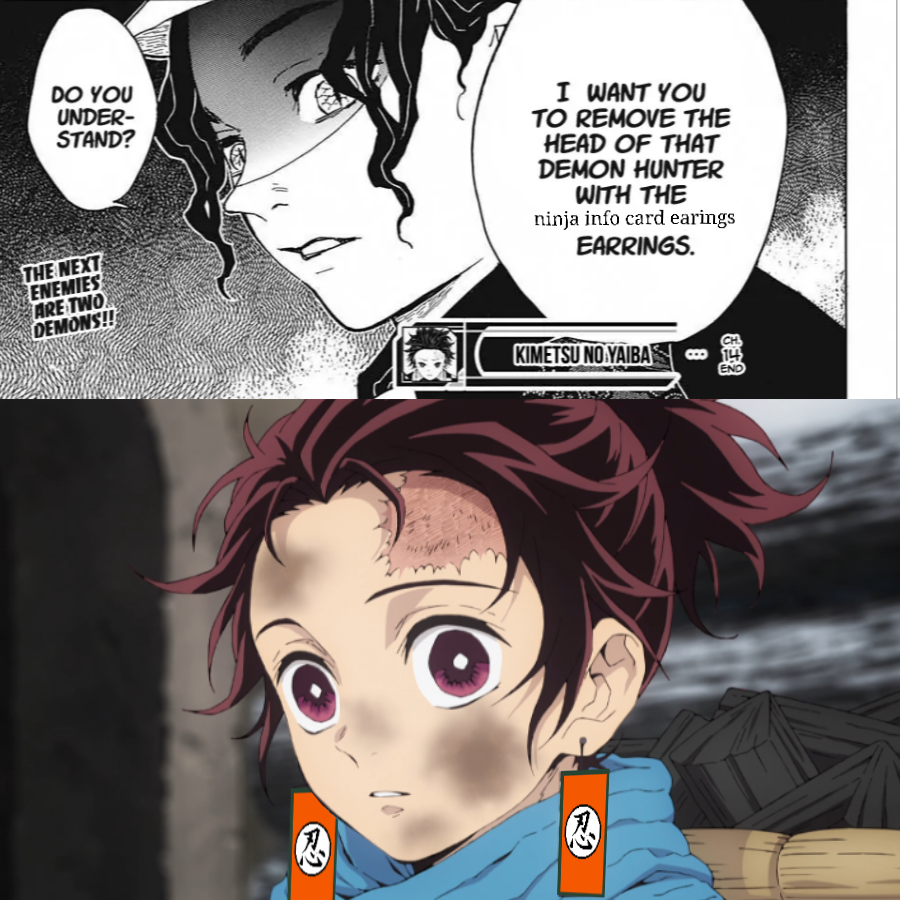 Land of the Lustrous↩

>I ended up watching this on a whim and was very pleasantly surprised. The vast majority of the cast is nonbinary, the character designs are so damn amazing, the anime is really cool and I love the soundtrack, I love Sensei so much, and the color spreads remind me of some of the artsier Sailor Moon color spreads.

I even made a gemsona! 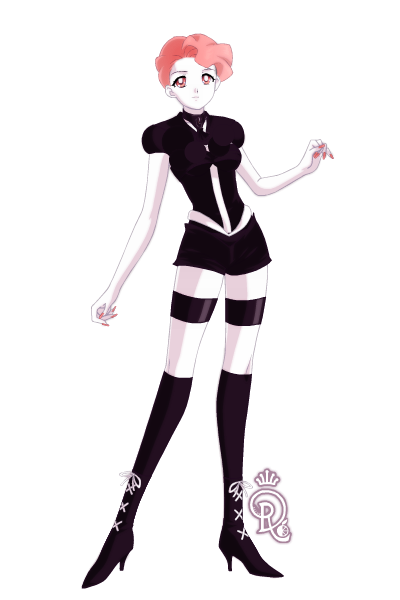 Their name is Andesine and their hardness is 6.3. 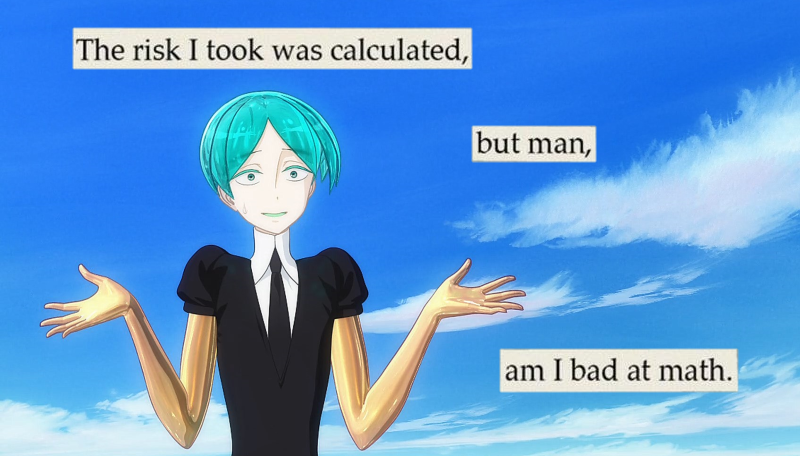 you, confused: hnk doesn't seem that fun to read because things just get progressively worse and man why do you keep reading it? you must really enjoy it
me, desperately clinging to the pages via my laptop screen: i'm the only friend phos has left. if i stop reading they'll be alone 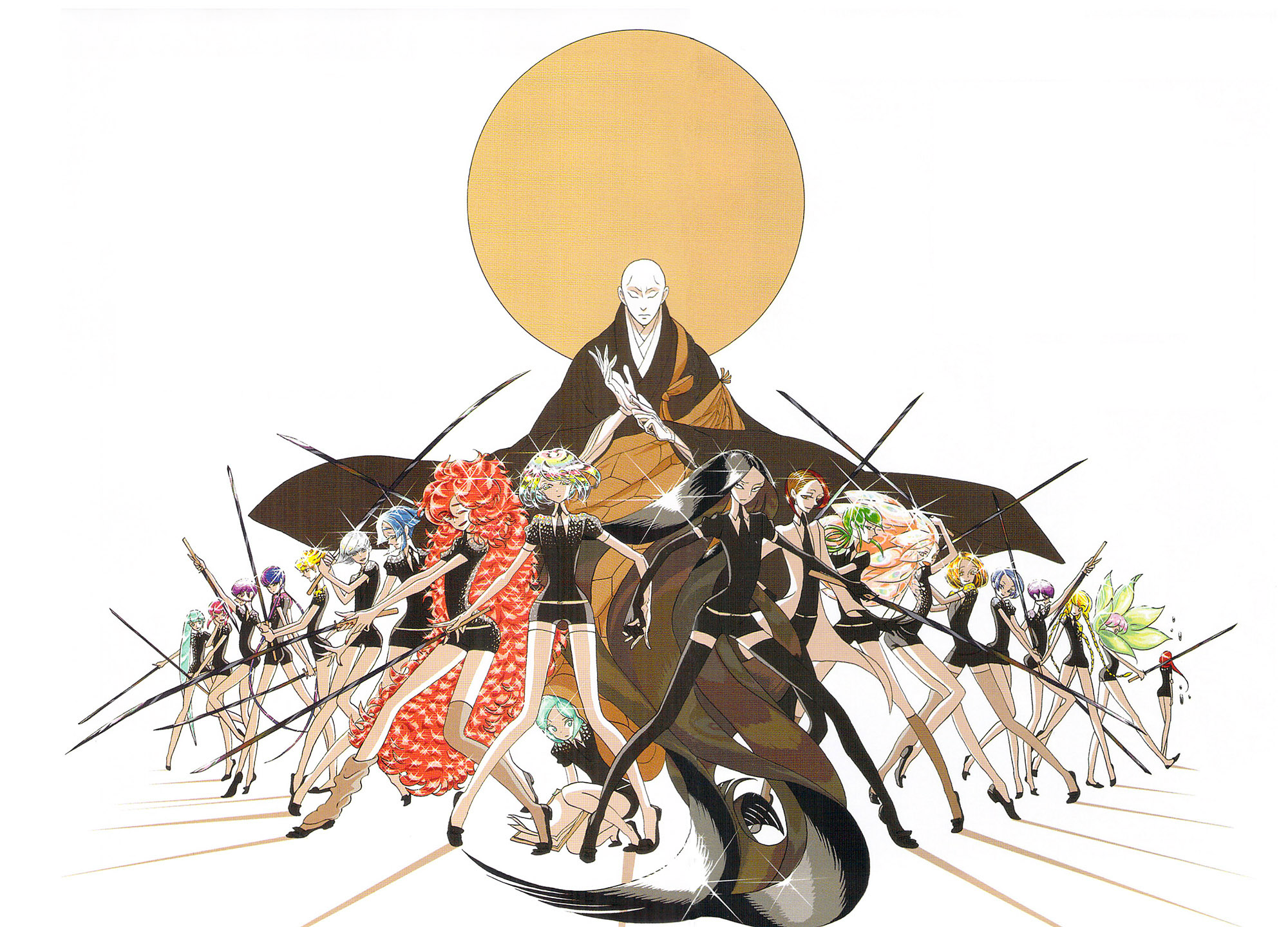 > I'll admit, I'm not really super into the story of this series, but I really love the side characters and character designs, so I made this to collect some things I like for it.

>Who would win in a fight, jonathan joestar or all might?

you fool, they would shake hands like gentlemen. they both win because they won each other’s friendship

Look, I'm going to be level with you all. Unless something amazing and drastic happens between now (03/03/19) and the time you're reading this, I fucking cannot stand Bakugo. Cool, I don't give a damn if he's secretly really nice with a marshmallow center. Actions are what matter, and even now after character development he's still a fucking asshole. If he's so goddamned insecure that he has to constantly lash out or whatever, he needs to see a therapist, not be allowed to continue training to be a hero, where he's going to have to interact with all sorts of people.
I honestly don't understand why anyone in-universe can stand him. He's loud, rude, and such a fucking sore loser asshole that he has to be chained to get a winning medal because he doesn't like how exactly the battle turned out. Part of what really turned me off from the actual story was how Bakugo was somehow charismatic and sought after, even though he actively insults and denigrates everyone around him- it just felt like some sort of blue-and-orange morality thing because in real life that sort of person would have zero friends or admirers. And this is ignoring his years of bullying Deku. If I was in control of the BNHA universe, I would make him take a gap year or something to get a fucking grip.
Literally everything about him just makes me angry and miserable because so much of his 'character' is just straight up the bullies I grew up with and abuse from my parents. A lot of the time, I can't even stand him in fics unless it's severely AU or he's getting comeuppance because of just how upsetting he is.

i love them all

yes or no, do the students of class 1-A sleep with stuffed toys?

Assorted Headcanons I have for BNHA
I like to headcanon Izuku, Bakugo, and Satou as trans guys, Jirou, Ochako, and Hagakure as trans girls, and Kaminari as nonbinary. Kirishima's def gay, as is Jirou and she's also Momo's girlfriend. I also like h/c-ing Deku and Todoroki as some flavor of ace and arospec so that they have a queerplatonic relationship. Deku, Iida, Kouda, and Aizawa are also all autistic. I'll also admit I'm not insanely into Shinsou so instead of Mineta I like Shiozaki taking his place in Class 1-A. Aizawa and Present Mic are also married, with Aizawa being ace and homoromantic and Present Mic being pan. I don't really have any other strong headcanons for the rest of the class, except maybe a bit of love for Ojiro and Hagakure as a ship... 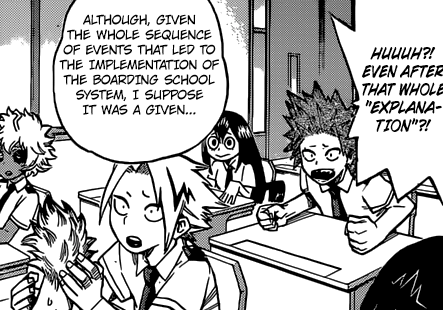 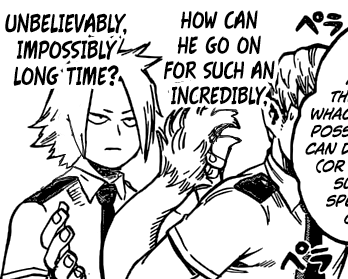 >I honestly have never read this series or watched the anime. I just like the memes and some of the side characters. 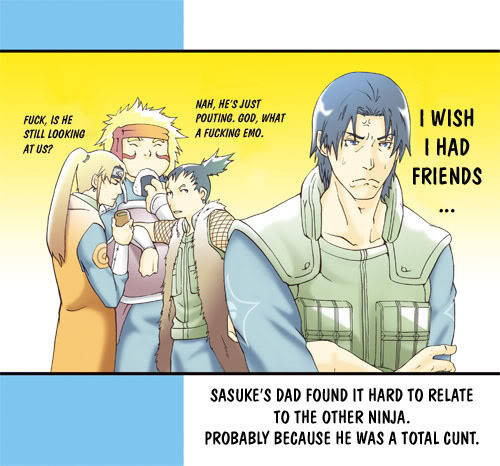 I fucking hate Sasuke and Sakura.

>God, I love this manga so much. The art is super beautiful, the story intriguing, and it has the perfect balance of horror, angst, and comic relief. Shame about the anime though... 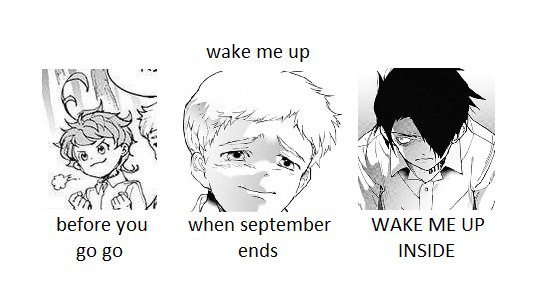 I ABSOLUTELY would die for PhilOr honestly any of the kids 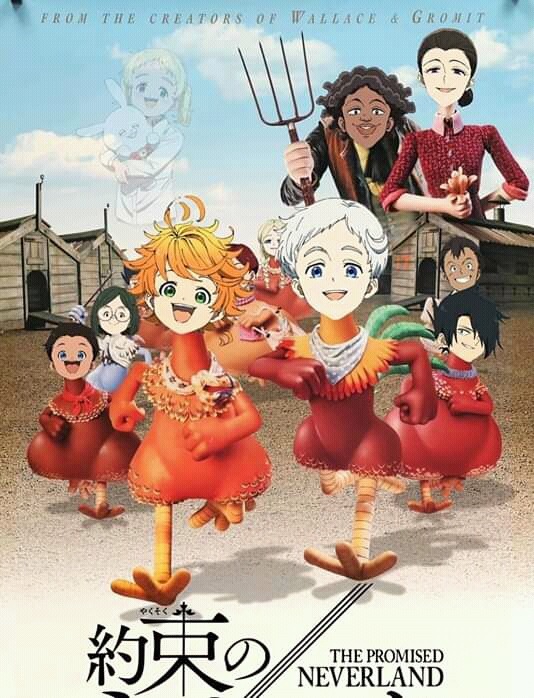 Another thing I love about The Promised Neverland is that Ray, Emma, and Norman are incredibly close to a canon OT3 triad, and I love them so much? 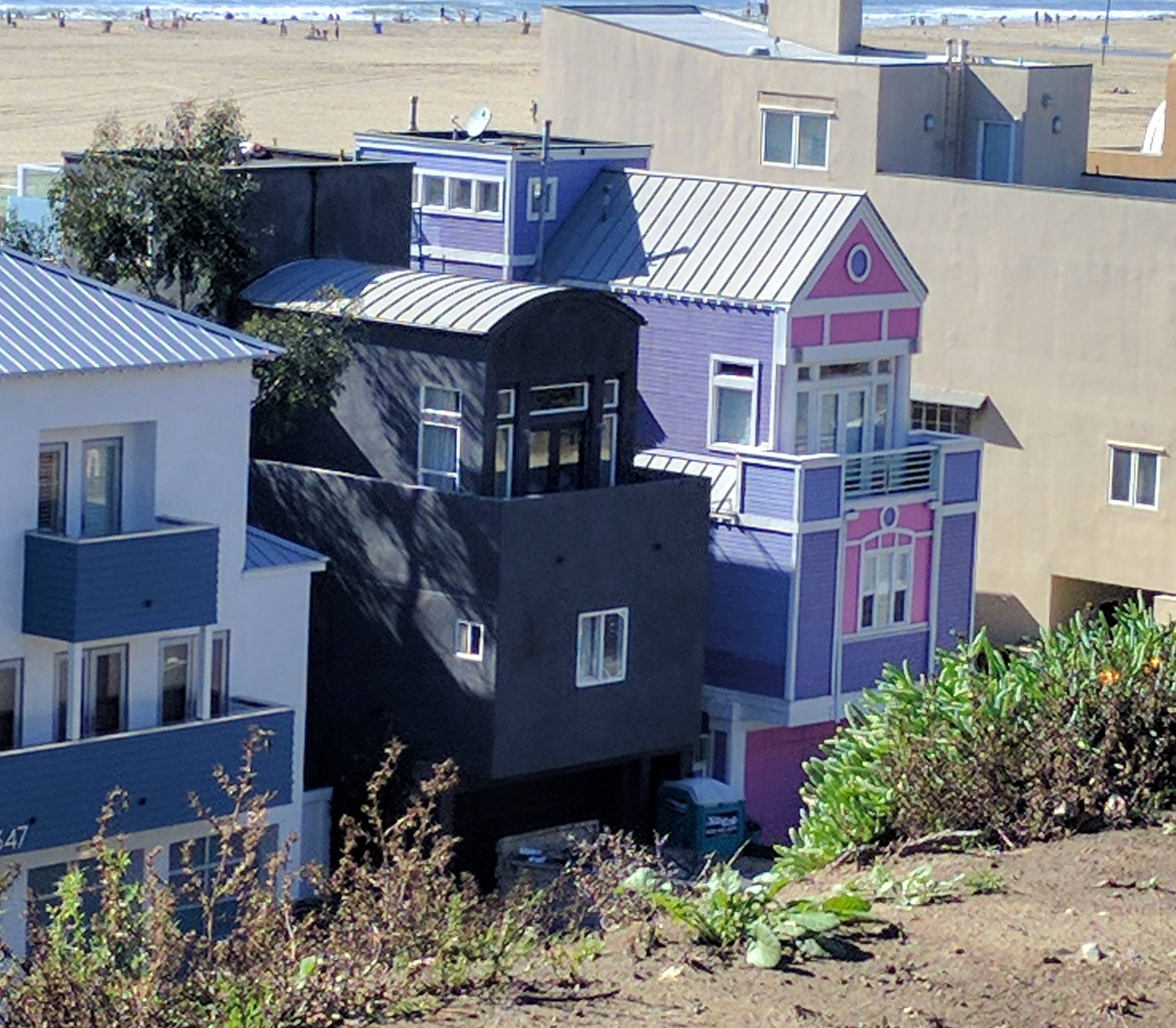 If Norman, Ray and Emma had their own houses and lived next to each other 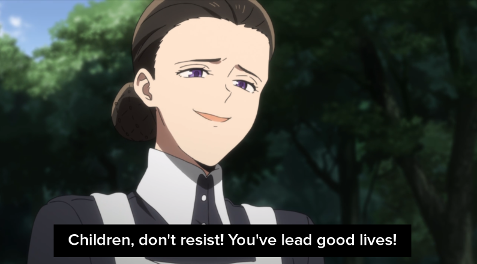 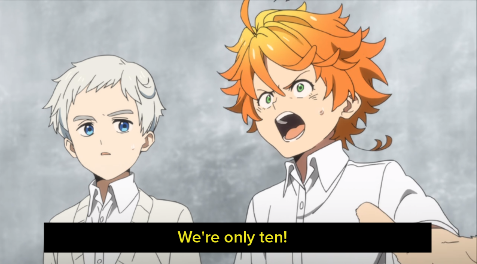 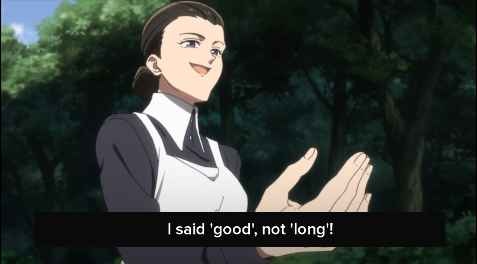 Emma's Choice: The Gender-Norm Nightmare at the Heart of The Promised Neverland